According to the Sunday Independent ... 50 years ago ... the outlook was ... mainly dry

Nuclear power plant offered to us

Reports are current in political circles that the Government has received an offer from a German industrialist to build a nuclear reactor in Ireland as part of his plan to provide power for industrial development. 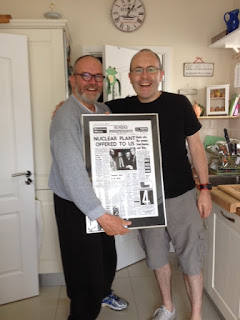 Folk singer Ann Byrne, of Blackrock, and Paddy Roche, Templeogue, a member of the Ludlow Trio, who have announced their engagement. Both are regular singers at the Abbey Tavern in Howth.

Teenagers dance on the dunes

Hundreds of jean-clad teenagers danced at a barbeque in the dunes of Brittas Bay last night while thirty Gardai stood by. But there was no trouble for the organizers of Club Caroline were well prepared. Wardens patrolled the area with megaphones and a squad of the local Order of Malta Ambulance Corps and lifeguards were on hand.

Flashing down the straight in Irish Sweeps Derby yesterday at Curragh, Lester Piggott urged the chestnut colt Meadow Court into an electric burst of speed to win £55,650.

A ridge of high pressure west of Ireland is moving east, followed by a trough of low pressure. The will be sunny periods in most areas, with outbreaks of drizzle in the west, late this evening. Moderate west winds, becoming south-west: average temperatures. Outlook: Mainly dry.

Talking about the value of immutability ... for deployment platforms and innovation

Dublin Innovation Festival - Talking about Innovation, Gilt and Ireland ... and Evolution and Darwinism

(Small) change to my social networking ...