These days people look for advice and insight into how to build and run a remote-first engineering organization. And want/need to learn fast!!! 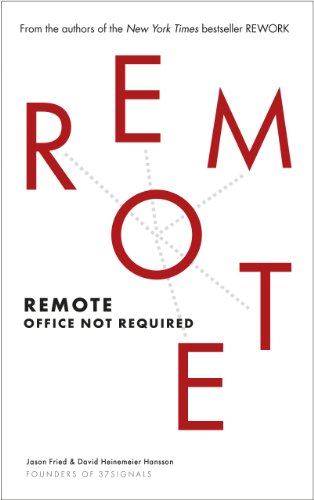 One good resource is (obviously) Remote (kind of the bible on working remote).

The book was published in 2013 (and was probably written in the 12 month before that).

Obviously the key messages/statements from the book are still true (or truer than ever), but I think that since then things have also changed and evolved.

I think today the situation has changed in the sense that companies have developed a nuanced opinion on the advantages of being hub-first (80% of the people work from an office location) or remote-first (80% of the people work from home (or any place)). And they have developed this nuanced understanding because the believe that the chosen model materializes a business advantage for them.

My observation is that in a lot of cases you do not need to sell working from home anymore. Instead you are asked to do it. Or even more specifically you will be asked during the interview why you believe that you are good at working from home. Working from home has moved from being a favour that is granted to the employee, to a skill that you are expected to have (and a skill it is as soon as the initial excitement of working remote starts to wear off and you are starting to feel the downsides of being less connected than normally).

One other interesting point that gets raised in the book is the claim that if you work remote you are more productive, because there are less disruptions and it is easier to get into the zone (and stay there).

Again by now (I think) we have developed more nuanced views on the realities here. Means we have learned that the real challenge is to strive for a balance between being in the zone (on your own) and being available (to others and to emergencies).

I think my main point here is: embracing working remote (or from home) because your office is filled with interruptions and distractions and bad behaviors that make it hard to get into the zone is a bad idea because you probably first want to find out what is broken (bad behaviors, bad culture, …) and then fix these problems. Otherwise you run the risk that you will carry over these bad behaviors (and will end up in trouble (again); e.g. instead of tapping people on the shoulder, people will just constantly slack each other).

Times have changed. The book is (still) on of the best ways to start to develop an idea how working remote actually works (e.g. strong emphasis on async/written communication). But we have also made progress to embrace working remote much more then when the book was written. Some problems (as described in the book) can be considered solved and some problems have changed shape.

Let’s keep on learning how to get this (working remote) right.

TEDN - The most important tool ...

Hub-First vs. Remote-First vs. Pod-First ... Skating to where the puck is going to be