Building and managing remote-first organizations means that you also need to understand (and manage) distances!

To develop your ability to understand and manage distances is very important because human beings naturally need closeness (to other people and/or the purpose of the endeavor) to feel a sense of belonging.

But … wait a sec: What do you mean by distances (plural)? Is there more than one?

Big surprise: Yes! When I build and run remote-first organizations I worry about and manage at least the following distances …

Physical distance is the classical distance that we all know about. The important thing to recognize is that physical distance probably becomes a factor much earlier than you might think. Research (e.g. the Allen-Curve and the Dunbar-Number) has shown that communication and relationships take a hit as soon as you cannot see each other anymore (out of mind, out of sight; e.g. more than 100 meters on one floor or between two floors). After that you need to start to make an effort to bridge/compensate for the (physical) distance. For instance it becomes much harder to build and maintain (and (after a run-in) repair) relationships. A good lead indicator that something is about to go wrong is when people start to talk about each other and not to each other.

Physical distance is also important, because remote-first does not mean that you do not see each other. Quite the opposite. Every (healthy) remote-first organization that I know brings people together frequently. Either to work together or for social events (over functional boundaries). In that context you want to make sure that people are close enough to each other so that the meet once a week/month in smaller groups and once a quarter (with an over-night stay) in larger groups. Managing physical distance (e.g. hiring people in proximity to each other) makes managing a remote-first organization much more manageable. Note: (At least) Once a year you want to bring together the entire organization. For that everybody has to travel and the meeting will last a week. Means the physical distance is less relevant.

Time-zone distance is one of the big ones. And in a weird way much more important than physical distance, because it is easier to get it wrong. Everybody understands the impact of physical distance and we all have developed tools to deal with it. Time-zone differences are less well understood and (passively or actively) managing it is more of an after-thought (in some cases because spreading people over time-zones happens gradually (see also the boiling-frog problem)). At the end it is important to realize that execution requires daily communication. That means it is important that the people that work together are close to each other (from a time-zone POV), so that they have a lot of over-lap with each other. Creating a delivery squad between San Francisco, Dublin and St. Petersburg is probably not a good idea. Creating one between Stockholm, Berlin and Kapstadt, will probably work much better. As a rule-of-thumb I suggest that delivery squads should not be further apart than one time-zone +/- 1 (2 at the most)

Cultural distance is (another) weird one. Imagine three Irish software engineers in Dublin, Athens and Dubai working together remotely and a German, an Indian and a Greek software engineer are working together in Dublin (in the same office). The working assumption would/could be that the former setup is harder to manage/run than the latter. My experience is that this is not necessarily true. Again (I think) the problem is that cultural distance is not something that you can see (easily) and therefore (as a result) there is a lack of awareness that it needs attention. One good tool that I am using sometimes (to visualize cultural distance and (therefore) make it more tangible/manageable) is the Hofstede Culture-Compass. 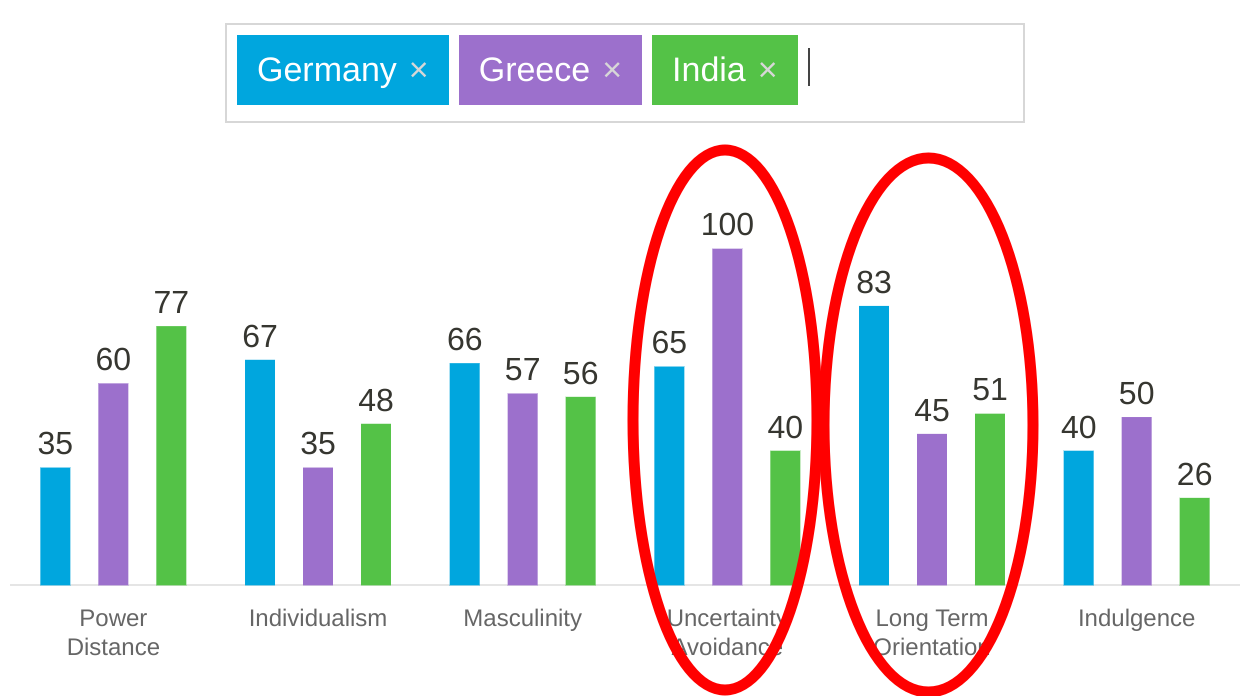 As you can see from the picture, some of the values (what people want and need to feel safe and valued) are not necessarily aligned. My experience is that in some cases you (actively) need to do something about it (to reduce the cultural distance), but in a lot of cases it is already sufficient to call out the fact that the distance exits and that we have to work to bridge it (and/or make it smaller). In any case: Ignoring it will probably not give/get you the outcome you are looking for.

There are probably a couple more distances to consider. Let me know, if you have one you care about.

Aiming for a “zero-distance” organization is obviously not practical. But at the same time you do not want to be naive about it and want to make sure that at every given point in time the sum of all distances does not exceed your ability to build, run and manage the organization. Choose wisely …